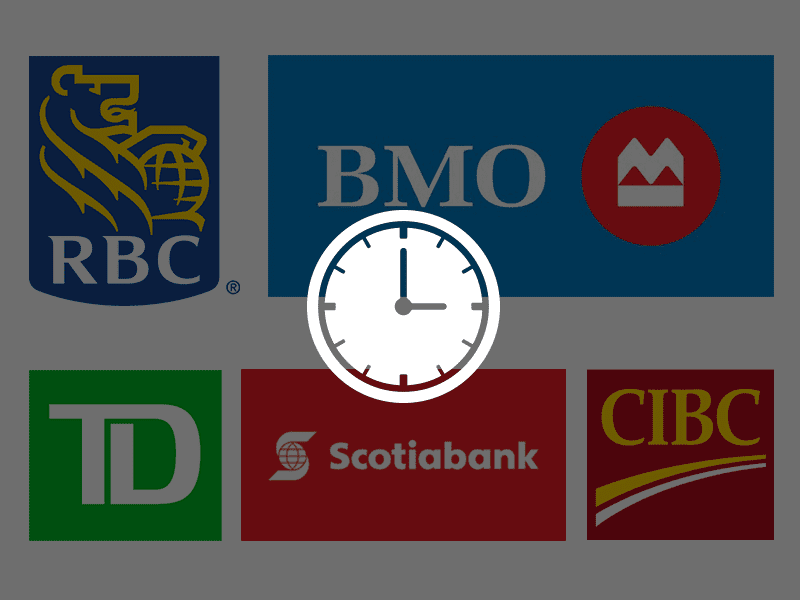 It’s been an extremely challenging time for small businesses. Cash flow issues and reliance on government funding have become the new norm. We’ve received feedback from our customers that have struggled with the digital options available from the banks, such as remote deposit capture and ATMs, as these options only accept checks up to a certain amount. When digital payments aren’t an option, before making a trip to the bank–make sure it’s open. To help, we’ve compiled a list of both COVID and CORE banking hours in Canada for the Big Five banks:

The Royal Bank of Canada is the largest of the Big Five with respect to revenue ($46.0 billion in 2019) and number of employees (85,000 in 2019). Founded in 1864 in Halifax, Nova Scotia, as a commercial bank financing the fish and timber industry. RBC now has over 10 million clients and 1,209 branches worldwide.

Toronto-Dominion Bank is the second largest of the Big Five with respect to revenue ($41.1 billion in 2019) and has 89,000 employees. TD Bank is the result of a merger of the Bank of Toronto and the Dominion Bank in 1955. TD now serves over 11 million customers at it’s 1,091 retail locations in Canada.

The Bank of Nova Scotia also known as Scotiabank is the third largest bank in Canada with respect to revenue ($28.8 billion in 2019) and 99,000 employees around the world. Founded in 1832 also in Halifax, Nova Scotia, to improve the transAtlantic trade industry. Today Scotiabank serves 10 million customers at it’s 900 Canadian locations.

The Bank of Montreal is the fourth largest Canadian bank with respect to revenue ($22.8 billion in 2019) and over 45,000 employees around the world. Founded in 1817, BMO is the oldest bank in Canada. BMO now serves over 7 million customers and has over 939 Canadian branches.